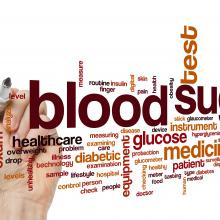 This is particularly important if you’re diabetic. But all of us can benefit from avoiding excessively high blood sugar levels after eating. This week, I’ve a got a simple hack that can help you minimize your post-prandial glucose levels.

What Happens When You Eat

Your blood glucose (or sugar) levels begin to rise within about ten minutes of beginning a meal, reach a peak after 1 to 2 hours and should return back to baseline within 2 to 3 hours. How high that peak is and how long it takes for your blood sugar to return to normal depends on many factors, including what and how much you eat, whether you’ve exercised recently, and how well your body responds to the insulin produced by your pancreas.

High post-prandial glucose levels can be a warning sign that your body is becoming less responsive to insulin, which means you may be heading towards full-blown Type 2 diabetes. If you’ve already been diagnosed with Type 2 diabetes, it suggests that your diabetes is not being well managed.

How to lower post-prandial glucose

If your post-prandial glucose is high, the usual advice is to cut back on your portion sizes–in particular of any breads, grains, potatoes, fruit, baked goods, sweetened beverages and other foods that are rich in carbohydrates.

Certainly, eating these foods in excessive quantities isn’t a good nutrition prescription for anyone. But assuming that the portions are reasonable, there may be a way to keep those post-meal blood sugar levels under control without having to further reduce or eliminate carbohydrate-rich foods.

Researchers from Weill Cornell Medical College found that the order in which we consume foods may have a substantial impact on our blood sugar response to the entire meal.

In the usual nutritional analysis, these two meals would be considered identical. But it appears that even small differences in timing make a big difference.

Eating the carbs second had a major impact on blood sugar and insulin levels after the meal. Peak blood sugar levels were about one third lower and the total rise in blood sugar was about 75% less when the subjects ate the protein and vegetables first.

Now there were some limitations to this study. First, it was small, involving only about a dozen subjects. Hopefully, a larger trial to confirm these findings is in the works. Secondly, these subjects were all overweight and diabetic, so we can’t say for sure whether healthy or prediabetic subjects would respond the same way. My educated guess? That the trend would be similar but the difference perhaps not as dramatic.

So what would this mean in terms of meal planning? Perhaps instead of starting breakfast with fruit or juice and following with eggs, it might be smarter to start with the eggs and finish with the fruit. Maybe you’d be better off trading that the pre-dinner bread basket for a piece of cake afterward?  Another potential benefit to this strategy is that you might get full before you get to the carbs!

And here’s one more hack that may help avoid post-meal blood sugar spikes, especially if your meal contains high glycemic foods like white bread. Researchers from the University of Naples, Italy, found that when subjects ate a meal containing high-glycemic carbohydrates, their post prandial glucose levels were about 50% lower when they ate those foods with extra virgin olive oil than when they ate those foods with either butter or no fat at all.

This was also a small study–this time involving Type 1 diabetics–but it’s consistent with previous studies in both Type 1 and Type 2 diabetics.  Although we tend to focus on carbohydrates when thinking about post-prandial glucose, it appears that the type and amount of fat may play a significant role in how those carbs affect our blood sugar. Monounsaturated fats seem to blunt post meal blood glucose while saturated fats don’t. In fact, the saturated fat appeared to delay the speed at which blood sugar returned to normal after the meal.

So, if you’re going to have that white bread with your meal, save it for the end and then dip it in a nice olive oil instead of spreading it with butter!  Or, for a special occasion, you might want to skip the bread and have a piece of olive oil cake for dessert. (Here’s a recipe to try.)