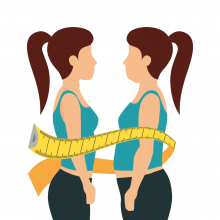 Is carrying a few extra pounds really as big a deal as everyone makes it out to be?

It’s true that body weight is strongly correlated with the risk of various diseases such as heart disease, stroke, cancer, and diabetes. But there are numerous other indicators as well, including blood pressure, blood sugar, blood fats, and inflammation. Some have argued that you can be overweight and still be considered “metabolically healthy” if these other risk factors are normal.

Not true, according to a new study. Even for those with normal blood pressure, blood sugar, and cholesterol levels, simply being overweight increased the risk of heart disease by 28%. “We conclude that there is no such thing as being healthy obese,” said lead researcher Camille Lassalle.

This was a bit of a setback for those who advocate an approach known as Health at Every Size.

What is Health at Every Size?

The Health at Every Size movement promotes acceptance and appreciation of one’s body, even if you’re overweight. It encourages overweight people to shift their focus from losing weight to other healthy habits, such as eating healthy foods and getting more exercise. I’ve noticed more nutrition professionals getting on board the Health at Every Size bandwagon and I think I understand some of the reasons why.

Weight is Just a Number

First, it is true that the number on the scale does not tell the whole story about your health.

Body weight and body mass index (BMI) doesn’t take into account body composition. A very muscular person may have a BMI that’s considered overweight or obese, when they are no such thing. On the flip side of the coin, someone with a low BMI may still have a high amount of visceral fat—the so-called “skinny-fat” phenomonen—which increases disease risk.

It’s worth pointing out that the conventional criteria for healthy body weight are based primarily on Caucasian body types and may not be appropriate for people of all races and ethnicities.

It’s also true that people who are overweight face bias and discrimination, and this unfortunately extends into the arena of health care. Numerous studies have shown that overweight and obese patients often receive substandard care and less support from their health care providers. Because obesity is more prevalent among low-income individuals and minorities, a bias against patients who are overweight can disproportionately affect these disadvantaged groups and contribute to a downward spiral of poor outcomes.

One of the goals of the Health at Every Size movement is to fight against the stigma and stereotypes associated with being overweight, and to advocate for equal access and treatment, regardless of size.

Let’s Focus on Something We Can Change

I think another reason that some nutrition professionals are promoting the Health at Every Size approach is that, despite spending the last two or three decades nagging everyone to lose weight, rates of overweight and obesity remain largely unchanged. Many adults have stopped trying, and who can blame them? The odds of long-term success appear to be dismal.

Personally, I think that’s because the way we’ve been taught to lose weight is completely wrong, and I’m doing my best to campaign for a saner approach. Once Oprah gets wind of it, our problems will be solved. But in the meantime, let’s not allow what we can’t change to keep us from changing what we can!

Being as healthy as you can be at your current size may also be a bridge to being healthier at a healthier size in the future.

Many years ago I profiled a reader who quit smoking cold turkey after being a heavy smoker for more than a decade. After she quit, she was surprised to find that she was suddenly more interested in nutrition and health—something she’d never really paid attention to before. She started going to the gym and eating healthier.

As she explained it to me: “I knew smoking was about the worst thing I could do and because I was smoking, it just didn’t seem worth doing anything else for my health. So I never bothered about nutrition or exercise or anything else. I figured I was a lost cause.”

In the same vein, the Health at Every Size philosophy tries to upend the attitude that exercise and vegetables are only for thin people. It encourages people to pursue healthy habits even if they are overweight, and offers ways to evaluate and measure progress other than simply stepping on the scale. For those who just can’t get the scale to budge, that may be really valuable.

Can You Be Healthy at Any Size?

In a society that’s both stubbornly overweight and intensely biased against being overweight, the Health at Every Size philosophy offers a valuable and needed perspective. It’s not that your weight doesn’t matter. It’s just that it’s not the only thing that matters—in terms of your health but also in terms of your value and rights as a human being.

If you’re overweight, losing weight would probably decrease your risk of various diseases, especially if you go about it in a sane and sustainable way. But choosing healthy foods and being active can also help you be healthier at your current weight. And being as healthy as you can be at your current size may also be a bridge to being healthier at a healthier size in the future.