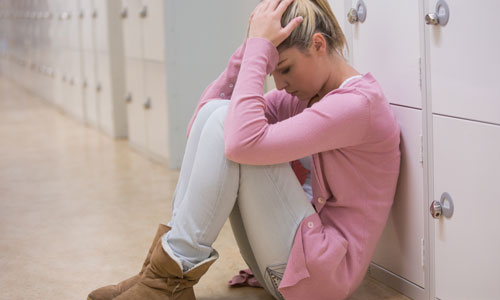 From ill-advised Hollywood marriages to good ol’ oil and water, separation is an inevitable part of life.

So it is with separation anxiety. Virtually every toddler goes through a totally normal developmental stage where being away from a primary caregiver is met with tears and clinging that falls somewhere between “baby koala” and “laundry with no dryer sheet.” And it makes total sense—of course a child would get upset about being away from the person who takes care of them. But all the fuss usually subsides by about age 2.

Now, “usually” doesn’t mean “always.” Lots of school-age kids and teens—studies estimate around 1 in 20—have separation anxiety, which can lead to very real problems, like not wanting to go to school and having trouble making friends.

But guess what? Separation anxiety is just as common, if not more common, in adults than in kids. One study estimates that a full 6.6% of adults will have separation anxiety at some point in their life, whether it spills over from childhood or starts fresh as an adult reaction to bereavement, panic attacks, or something else. What does this mean? It means if you suspect this might mean you, you’re far from alone.


What are the signs of adult separation anxiety? To illustrate, meet Megan, a client I worked with a few years ago (clearly not her real name—I’d like to keep my license). Megan was a smart, thirty-something grantwriter who’d been married for almost ten years. Early in her marriage, she would travel and spend time alone without a thought, but after a few years she found it harder and harder to be without her husband. This is the hallmark—getting distressed and worried when you have to be away from your spouse, a parent, or whomever it is you’re attached to.

At first she thought she was just overprotective or a worrywart. But separation anxiety is a very specific kind of distress. You might worry about your loved one dying or getting injured, being in an accident, or getting sick. Conversely, you might worry you’ll need their help and not be able to get it—you’ll have an emergency, get hurt, or need them in some vague but urgent way.

In addition to worries about disaster, there are other telltale signs. For instance, going to sleep is particularly hard if your partner isn’t there, and to add insult to injury, you often have insomnia or separation-themed nightmares. To top it off, you probably have physical symptoms before you have to be apart, like headaches or GI problems.

For Megan, nothing traumatic happened to start her worry that something bad might occur to her husband or to her—no near-death experience, no heartstopping I-thought-I’d-lost-you-forever moment. The closest she could come to pinpointing a starting line was an out-of-the-blue panic attack she had before boarding an airplane for a business trip a few years before. She didn’t think much of it at the time, but over the years, her anxiety got to the point where she couldn’t travel for work or get away for a weekend with friends. Worse, when her husband had to travel, Megan would have GI problems for days, and then would have to use her vacation time to go stay with her rightfully baffled parents. Her situation wasn’t working for anyone, especially Megan.


But for Megan, and for the millions of adults with separation anxiety, the worst part wasn’t even the symptoms, it was the embarrassment. It’s humiliating to disclose that you’re a grown-up who can’t be away from your partner or parents. And for the 43% of adults whose fears developed after age 18, it’s hard to reconcile your logical brain, which makes you feel ridiculous, and your fear, which is very real and very convincing.

What to do about separation anxiety? Luckily, there are lots of things to try. Start with these 5 tips:

The overarching theme of separation anxiety is uncertainty. This is the constant “what if”-ing that never seems to end. What if something bad happens? What if I need help and no one’s around? What if there’s a problem and she needs me?

I’ve said it before, and I’ll say it again: anxiety is vague. When your brain worries that “something bad” might happen, ask it to be more specific. What specifically are you worried about? Sometimes, there’s nothing specific, which can be a surprising relief. Other times, there is a more specific fear, and once you whittle vague, non-specific “what ifs” down to concrete “what ifs,” you can move on to Tip #2, which is…

Your anxiety intends your “what if” questions to be rhetorical, but instead, try answering them.

“What if there’s a hurricane, his plane can’t take off, and he’s stuck?” Well, then he’d seek shelter in the airport, follow any emergency procedures, and probably have a few margaritas while he bonds with fellow stranded passengers. “What if I get sick while my partner’s away?” Well, you’d call your doctor, or, worst-case scenario, an ambulance.

This is important because anxiety tries its hardest to convince you you’re not capable. By answering the question and coming up with a plan, you fight back by showing anxiety you can handle whatever it throws at you.

Tip #3: Shift from “What could happen?” to “What’s happening right now?”

All these things are true—there could indeed be a disaster. But instead, shift your focus to what’s happening right at this moment. “I am currently safe.” “I am brushing my teeth and getting ready for bed in my apartment.” “I am letting my mind spin with worry while absently petting my dog.”

Essentially, this is mindfulness. Reel your mind in from the imaginary future and settle it on the very real here and now. Pay attention to what you’re actually doing, not to improbable catastrophe. Brush your teeth. Pet your dog. Focus on where you are, not where your mind wants to take you.

Interestingly, one study found that almost half of adults with panic disorder—that is, fear of having another panic attack—also have adult separation anxiety disorder. Let me say that again: in their sample, fully half of people with panic also had separation anxiety. That’s a lot of people!  This made sense when I thought about it—lots of people who are worried about panicking keep close to their nearest and dearests. It makes them feel safer.

But what’s going on here? Why might so many people with panic also have separation anxiety? There’s no definitive answer, but it’s possible that both problems are driven by over-interpreting your own body signals.

The hallmark of panic is misinterpreting body sensations as dangerous. Your heart may start to pound for no apparent reason. Or you’ll randomly feel a little lightheaded. But then, your brain over-interprets these random—but totally normal—blips and bloops of your body and concludes you’re in real danger, which in turn triggers fight or flight, which, ironically, amplifies your anxiety and kickstarts a panic attack.

In a rather torturous study, researchers had adults with panic, adults with separation anxiety, and a control group breathe in a mixture of regular air and 35% carbon dioxide, which is fairly unpleasant and can make you feel like you can’t breathe or are even suffocating.


The researchers concluded that an underlying hypersensitivity to potentially alarming body sensations—known to be a problem in panic—may also be true for separation. I hope they also concluded that they had better pay their participants a wheelbarrow full of money for being willing to endure a panic attack.

Therefore, if you’re scared to be alone, this is one place where you don’t want to take the advice of “listen to your body.” Remind yourself that your body may not be a credible source of information when you’re scared.

Tip #5: Of course, practice being by yourself.

Start slowly. Practice being apart for a few hours, then overnight, then a day. Send your partner to stay with a trusted friend or offer to house-sit when a relative goes on vacation.

When you’re alone, plan things to do that will help you cope, but also be willing to be anxious. The first few times are always the hardest, but it gets easier every time.

So if you’re sick of having to stick by your partner, get specific, answer your own “what ifs,” pay attention to the here and now rather the imaginary future, and for heaven’s sake stop asking your anxiety if you’re OK.

With all that, you and whoever you rely on can go the way of light and dark laundry: be separated, and then happily reunite.